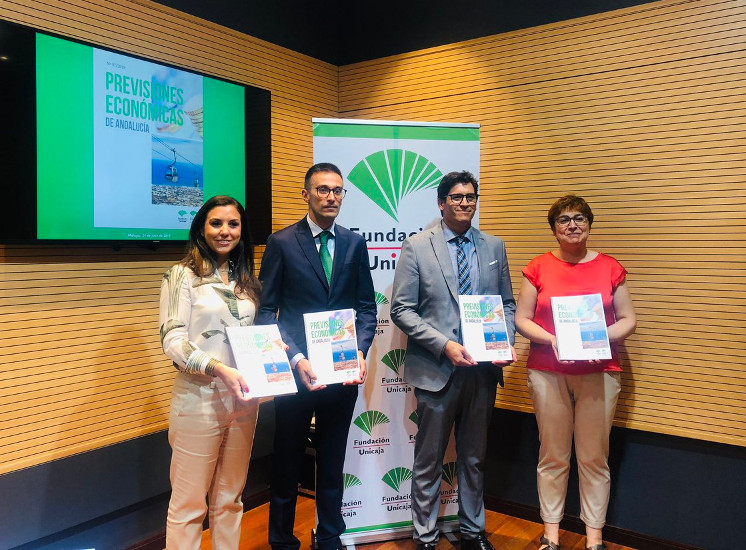 The Andalusian economy is expected to grow by 2.4% in 2019, 0.1 more than in March forecasts, with a positive contribution of all the productive sectors and of the components of the internal demand.

The report, which analyses the recent evolution of domestic and international economies, of Andalusia and its provinces, includes outlooks on the economic growth and its components for 2019, as well as the main variables of the labor market, with growth estimations for each Andalusian province.

The first half of 2019 has seen a loss of momentum in the global economic activity, more noticeable in the Eurozone, due to the persistence of trade tensions and certain sources of uncertainty. In this context, the main international organisms have made a downward revision of their economic forecasts for the coming years. According to the OECD, in 2019, the global economy will grow by 3.2%, 0.3 percentage points (p.p.) down from six month before. Even if it has not been immune to external shocks, the Spanish economy has continued growing at a stronger pace than that of the Eurozone. The most recent forecasts point towards a moderated growth, but with rates over 2%.

As per its composition, the contribution of the internal demand has been of 2.4 p.p. (2.7 p.p. in the previous quarter), underpinned by the growth in investment (4.3%) and expenditure, both of Public Administrations (1.8%) and of households (2.1%). On the other hand, after six consecutive semesters of negative rates, the external sector has made a positive contribution to regional growth (0.2 p.p.), due to exports growing more than imports (1.6% and 1.2%, respectively, year-on-year).

From the point of view of supply, a general growth is seen in all sectors, with rates ranging from 0.4% in agriculture to 7.4% in construction. Industry and services have grown at higher rates than in the last quarter of 2018 (1.2% and 3.0% respectively).

With regard to the labor market, in the first quarter of the year, the number of persons in employment is up 4.7% year-on-year (4.0% in the previous quarter), with significant rises in services (4.3%) -a sector comprising around 75% of employment- and construction and industry (12.0% and 8.2%). The workforce has decreased by 0.2% year-on-year, reducing the number of unemployed people by 15.0% Unemployment rate stood at 21.1% (14.7% in Spain), 3.7 p.p. lower than the rate of the previous year.

For 2019, Analistas Económicos de Andalucía estimate, a GDP growth of 2.4%, 0.1 p.p. more than in March forecasts, due to a better behavior during the first months of the year. From the side of supply, a positive contribution by all sectors is expected, ranging from 0.6% in the agricultural sector to 5.0% in construction, and with a growth of 2.5% in services. From the side of demand, a growth of 1.8% in households’ expenditure is expected, with slower growths in investment (3.6%). The growth of expenditure in Public Administration consumption would stand at 1.9%.

As for the main variables related to the labor market, a growth of 2.5% in employment is expected for the whole 2019. By sectors, the increases would range from 2.3% in agriculture and industry to 8.0% in construction, whereas a 2.0% rise is expected in services. The number of unemployed would decrease by 8.3% and the unemployment rate would stand at 21.2% in the year average, 1.9 p.p. less than that registered in 2018.

In the first quarter of 2019, according to the estimations of Analistas Económicos de Andalucía, all the Andalusian provinces have post increases in production, higher in Malaga (3.0%), Huelva (2.8%), Cádiz (2.8%) and Seville (2.7%). Growths in Almeria and Granada have been similar to the regional average.

The estimations for 2019 indicate that again Malaga (2.6%) and Cadiz (2.5%) will be the provinces with highest growths, whereas Sevilla would post an increase in the activity in line with the regional average.

Unicaja Banco has been promoting a set of measures since the beginning of the coronavirus crisis to support families, businesses and the self-employed to mitigate the effects of the crisis and to contribute to the economic reactivation 03 AGO 2020
Read news

Unicaja Banco and the University of Malaga (UMA) have signed an agreement which will allow, thanks to the support of the financial institution, the start-up of a lab to carry out COVID-19 diagnosis with PCR tests. Additionally, this collaboration will allow for the development of research on the disease 29 JUL 2020
Read news

The bank offers its support to the members of CEM, and it puts at their disposal a comprehensive range of specific financial products and services under advantageous conditions, to facilitate their daily activities, investments and recurring payments 27 JUL 2020
Read news