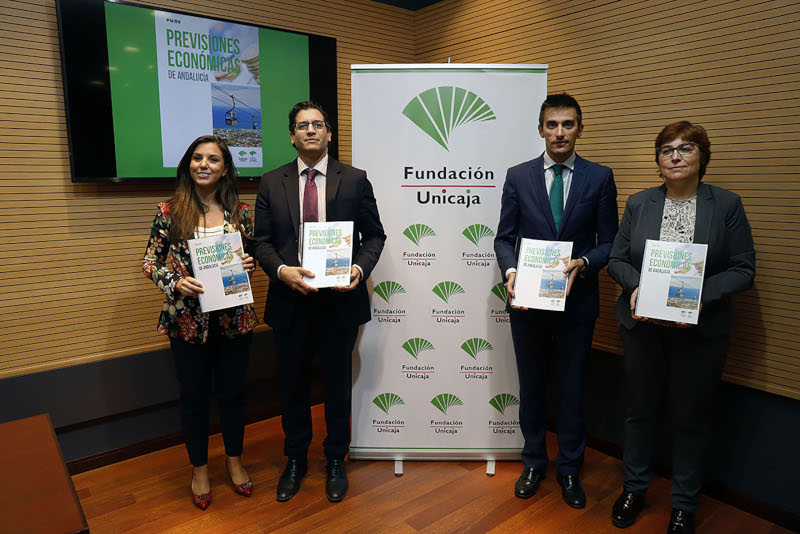 The latest issue of the report 'Previsiones Económicas de Andalucía' (no. 94. Autumn 2018), prepared by Analistas Económicos de Andalucía, has been published

The Andalusian economy is expected to grow by 2.5% in 2018 and by 2.3% in 2019, underpinned by the internal demand and by the positive contribution from all productive sectors.

The issue number 93 of the quarterly report ‘Previsiones Económicas de Andalucía’ (Economic Forecast for Andalusia), corresponding to Autumn 2018 has been published. This report has been prepared, as in previous editions, by Analistas Económicos de Andalucía (research company of Grupo Unicaja) and sponsored by Fundación Unicaja. It has been presented today at the Sala Unicaja de Conciertos María Cristina, in Malaga.

The report, which analyses the recent evolution of domestic and international economies, of Andalusia and its provinces, includes the growth forecasts for the GDP and its components for 2018 and 2019, as well as the main variables of the labour market, with growth estimations for each Andalusian province.

The world economy maintains an expansive profile, although it has lost some dynamism in the last months, due mainly to the adoption of protectionist measures in international trade relations and to the existence of geopolitical risks.

In this context, the Spanish economy continued with its growth trend started in 2013, with year-on-year variation rates in production of around 2.5%. The most recent perspectives expect a slowdown due to a worsened external environment and to the moderation in the contribution by the internal demand components.

The latest information, related to the second quarter of 2018, shows that the Andalusian economy recorded a quarter-on-quarter growth of 0.5%, 0.1 p.p. less than in the previous quarter. Year-on-year GDP growth stood at 2.5% (2.9% in the first quarter of 2018).

As per its composition, the growth is due to the dynamism of the internal demand, whose contribution to the GDP growth has increased by 0.3 p.p. up to 3.2 p.p., as a result mainly of the faster pace of growth of investments (7.1%), whereas household expenditure grew by 2.2%, 0.6 p.p. less than in the first quarter. Public Administration expenditure grew by 2.4%. The net external balance has deducted 0.7 p.p. to the growth, due to exports growing at slower pace (2.9%) than imports (4.2%).

From the point of view of supply, all the sectors have registered year-on-year growths in the second quarter, with higher increases in agriculture and construction (3.8% and 7.9% respectively), whereas industry and services grew at a rate of 0.4% and 2.1% respectively.

With regard to the labour market, in the second quarter of 2018, employment maintained a solid growth pace. According to the Labour Force Survey, the number of persons in employment grew by 2.4% year-on-year (2.0% in the first quarter), with a faster pace in the non-agricultural sectors, especially construction.  The number of unemployed persons decreased by 9.0%, and the labour force is down by 0.5%. Unemployment stands at 23.1% (15.3% in Spain), 2.2 p.p. lower than that of the second quarter of 2017.

For the whole 2018, the forecasts of Analistas Económicos de Andalucía indicate a growth of 2.5% in the Andalusian economy, 0.2 p.p. less than June forecasts and due mainly to a less favourable external environment. On the side of demand, increases in household consumption (2.6%) and in Public Administration consumption (1.6%) are expected, with investments growing by 4.5%. On the side of supply, a positive contribution by all sectors is expected, with growth rates ranging from 1.8% in the agricultural sector to 6.2% in construction.

An average growth of 2.4% in employment is expected for 2018. By sectors, higher growths are expected in industry and construction (3.9% and 11.6% respectively), and a 1.9% increase is expected in services. A decrease of 0.6% in the agricultural sector is estimated. At the same time, a drop of 0.5% in the labour force and of 9.0% in the number of unemployed is expected. The unemployment rate would stand in 23.3% as year average, 2.2 p.p. under the average for 2017.

With regard to 2019, the expansionary phase of the economic cycle is forecast to continue, although the GDP would grow at a slower pace, at a rate of 2.3%. A positive contribution of all the sectors is expected, with rates ranging from 0.6% in the agricultural sector to 3.8% in construction. Growth will continue to be underpinned by the internal demand, with an expected increase in household expenditure of 2.3%, of 1.5% in Public Administrations expenditure, and of 3.0% in investments. On the other hand, a growth of 2.1% in employment is also forecast, with a decrease of 7.3% in unemployment and an average unemployment rate of 21.7% for the year, 1.7 p.p. lower than the forecast for 2018.

Analistas Económicos de Andalucía estimates that the second quarter of 2018 has witnessed a general increase in the economic activity. Year-on-year increases exceeding the region’s average have been recorded in the provinces of Malaga (3.1%), Cadiz (2.8%) and Sevilla (2.7%).

For the whole 2018, the forecasts indicate a general growth of the economic activity, exceeding Andalusia’s average in Malaga (3.0%), Sevilla and Cadiz (2.8% in both provinces), and in line with the regional average in Huelva and Jaen (2.5% and 2.4% respectively).